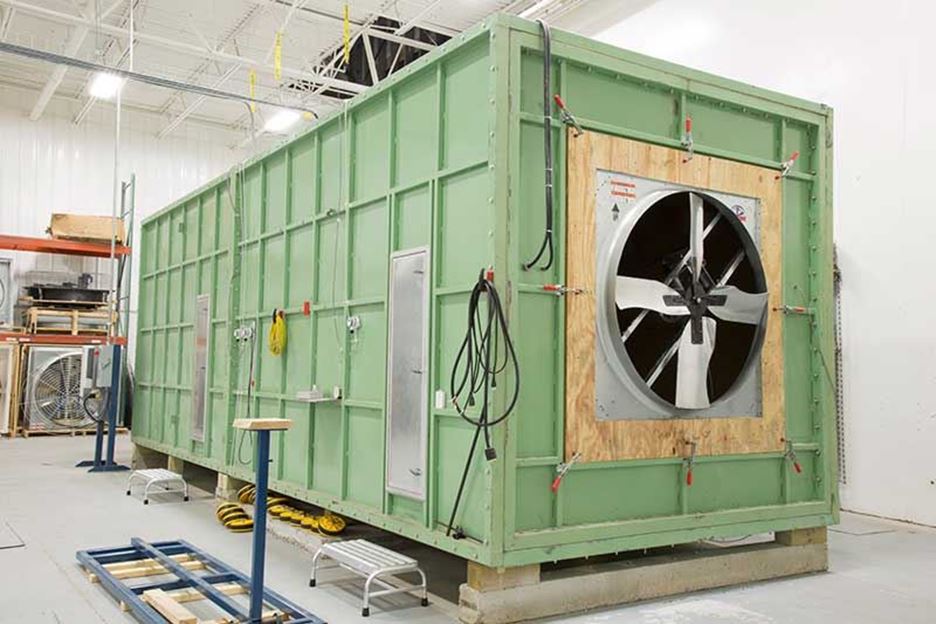 Management expert Peter Drucker is often quoted as saying that “you can’t manage what you can’t measure.” We believe this is particularly true when it comes to developing, improving and testing ventilation fans.

Hog Slat’s AirStorm and Windstorm ventilation fans are designed and tested using an Airflow Performance Test Chamber, or as it more commonly known, a Wind Tunnel. Measuring 10′ x 10′ x 28′ long, the Wind Tunnel was constructed according to AMCA standard 210 and installed at the Clinton, NC facility in May 2015.

Fans to be tested are fixed in place on one end of the Wind Tunnel. 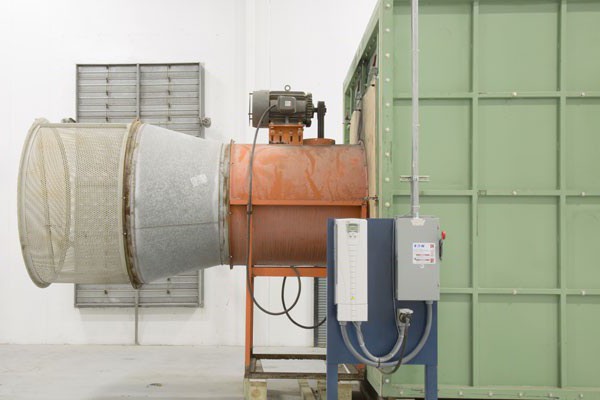 A 48″ axial vane fan, powered by a 20 hp motor, located on the opposite end of the tunnel, forces air into the chamber. 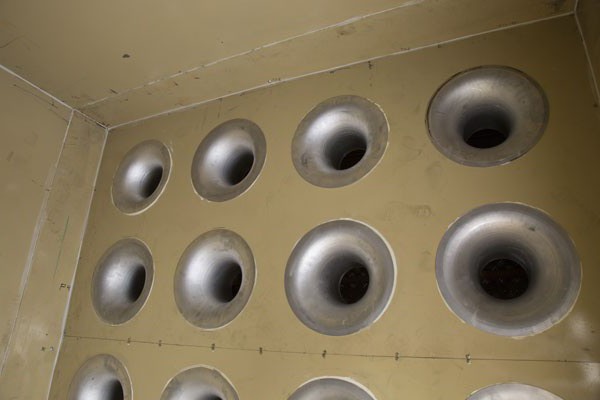 After passing through a series of mesh straighteners, the air is then forced through a nozzle wall consisting of metal cones that can be opened and closed to change available square inches of space. 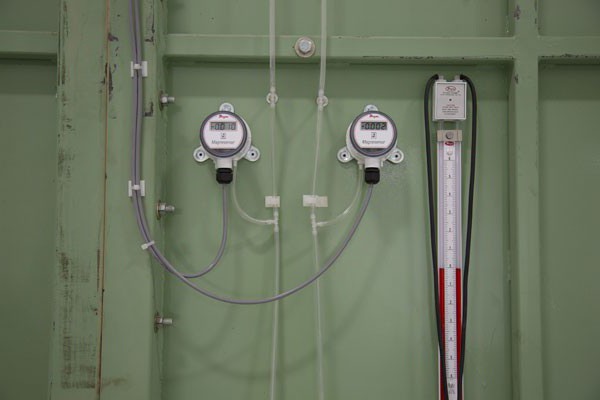 Two devices, called Differential Pressure Transmitters, measure and record the static pressure differential on each side of the nozzle wall.  To maintain precise accuracy, the transmitters are calibrated monthly and are also returned to the manufacturer for a factory re-calibration once per year.

One of the key features of Hog Slat’s test chamber is the automated recording system that records data without any manual input from an operator. The Wind Tunnel is ramped up from zero to maximum static pressure while up to two data points per second are recorded in real time. This automated recording system is a custom program developed by a team from Hog Slat’s engineering group. This allows Wind Tunnel technician, Matt Parker, to supply the engineering group with a complete fan performance graph instead of limiting the information to only a few selected data points. 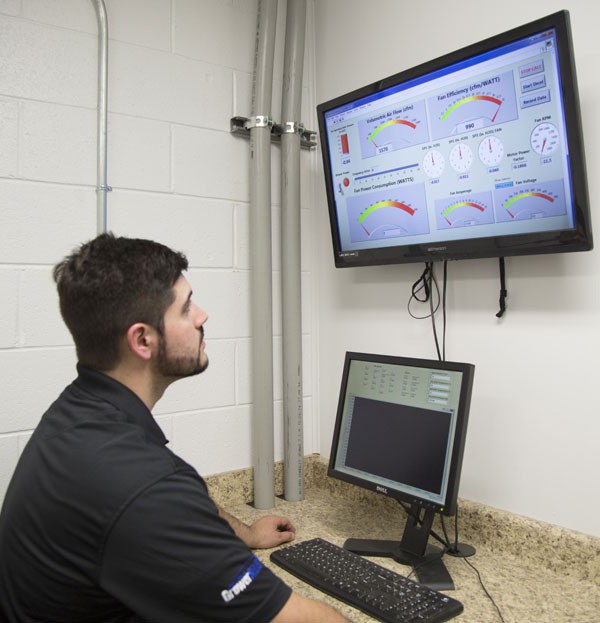 Lead engineer for ventilation products, Tyler Marion explains; “Having a Wind Tunnel in-house allows us to quickly break down a fan by critical components and test multiple variables quickly. We are able to test different motor/fan combinations, shutter designs, and cone styles to constantly improve the fans Hog Slat delivers to our customers.” 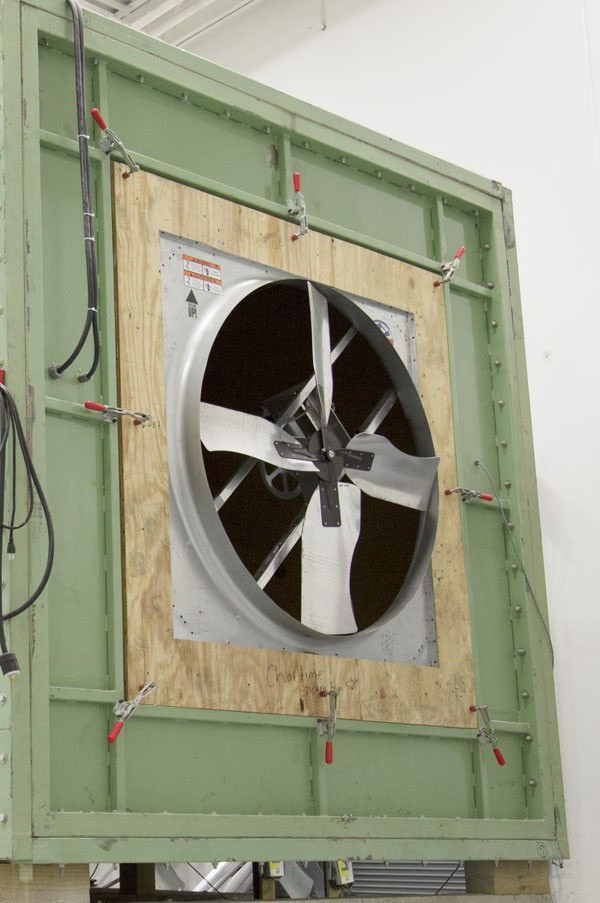 Hog Slat’s Wind Tunnel is not only used for fan testing and development, it also serves as a Quality Control check on products received from suppliers. The photo above shows a galvanized prop mounted in standard fan ring. In this case, the initial run of product from the vendor is being checked against the approved sample. This testing continues for each production run to ensure the same performance levels from lot to lot. QC checks are also run for completed fans pulled from inventory and checked against published standards for airflow, CFM/watt and motor amperage. 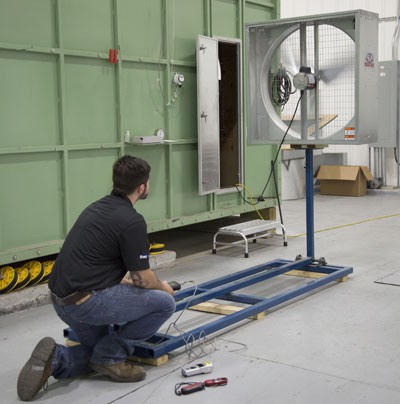 A new addition to our fan testing equipment is the device called a Thrust Tester. The Thrust Tester measures the amount of thrust (lbf or pounds of force) a stir or circulation fan develops.  It also measures the thrust efficiency ratio of a fan by dividing the lbf by kWs used. Although the Thrust Test is a stand-alone unit, it is tied into the Wind Tunnel transmitters to record the data. Matt also records centerline velocity at distances five times the prop diameter.